What is a turret reloading press? 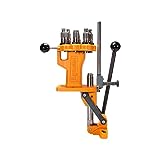 The turret head is designed to hold between three and seven reloading dies at the same time. And the press allows you to switch between seating, flaring, or resizing the dies. This is however achieved by rotating the head of the turret to the die in question before proceeding with the process.

There are essentially two different forms of the turret press, there is the manual or traditional turret press that requires you to manually move the press to the next die, while the auto-indexing form automatically progresses to the next die on every pull of the lever.

Does reloading ammo save money?

Several shooters reload their own ammunition because they feel it can help them save money, the question, however, is whether reloading truly saves money?

The first thing you would have to consider before you make your decision is the amount you would spend on the reloading press and the materials you would need to reload yourself. This includes a reloading press, a tumbler, cartridge components, and other essentials.

After the cost of the above, you also need to consider the running costs i.e. the supplies you would need to have in order to make the bullets. This includes brass, primers, powders etc. You could, however, decide to pick up already used cases at shooting ranges or have people you know save theirs for you.

In short, if you decide to reload you will, over a period of time save money. This, however, depends on the economy of scale as it very probably won’t make much difference if you only engage in it for a short period of time.

How to Choose the best turret press for reloading?

Before you make a decision as to which turret press to choose, there are certain features you should take note of some of which are;

There are different brands and models of turret presses that produce different qualities of it. The quality of the material used in manufacturing a turret press is important and is determined by the user.

For large volumes of precision ammunition, a press made of steel is suggested, while a reloader who is interested in bulk ammo should consider an aluminum press.

This feature makes the process faster, less tedious, and more exciting. Auto indexing is one of the most important features to consider.

The process of powder charging is also important in a turret press. Essentially, powder through expanding die is a component that will need to be purchased for each caliber as not all turret presses support them. This feature greatly increases your output and eliminates the need to remove the cases from the turret press.

This site uses Akismet to reduce spam. Learn how your comment data is processed.